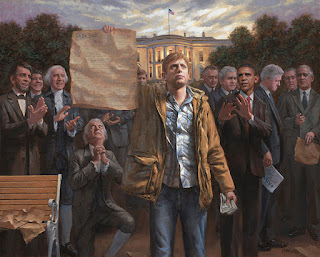 Popular conservative artist Jon McNaughton has released a new painting, the latest in his controversial series of anti-Obama artwork.

The Empowered Man—which shows President Obama watching in horror as a thirty something white male, standing in front of the White House holds up the U.S. constitution in one hand and a wad of cash in the other—was released this week.

“I wanted this painting to reflect the hope many Americans are having that we can steer our country back on track,” McNaughton emailed BuzzFeed. “I used real models and it took a couple of months to paint.”
Posted by Unknown at 8:43 PM