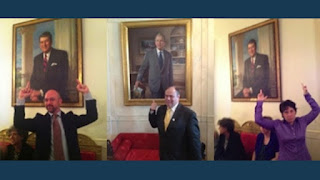 The White House on Friday rebuked two visitors who were photographed last week at 1600 Pennsylvania Avenue flipping the middle finger below a portrait of the late President Ronald Reagan.
The guests had been invited to a reception last Friday marking gay pride month. The images of them -- with both middle fingers raised, pointing up toward Reagan -- were first published by Philadelphia Magazine

.
The White House did not approve.
"While the White House does not control the conduct of guests at receptions, we certainly expect that all attendees conduct themselves in a respectful manner. Most all do," Shin Inouye, a White House spokesman, said. "These individuals clearly did not. Behavior like this doesn’t belong anywhere, least of all in the White House."
Photographer Zoe Strauss and Matty Hart, national director for public engagement at the group Solutions for Progress, had posted the images of themselves to Facebook.
Hart, under his, wrote simply: "F--- Reagan."
He later posted a link on his Facebook page to the Philadelphia Magazine piece about their gesture.
Neither Strauss nor Hart have responded to FoxNews.com for comment.
Hart, though, defended his gesture in the Philadelphia Magazine article. "Ronald Reagan has blood on his hands," he said. "The man was in the White House as AIDS exploded."
Hart said he doesn't care if he's not invited back to the White House.
A third guest, Philadelphia publisher Mark Segal, was also photographed next to George W. Bush's portrait, but used a more tasteful thumbs-up in his picture. He told Philadelphia Magazine he has friends in the White House and "I'm not going to do something that could embarrass them."