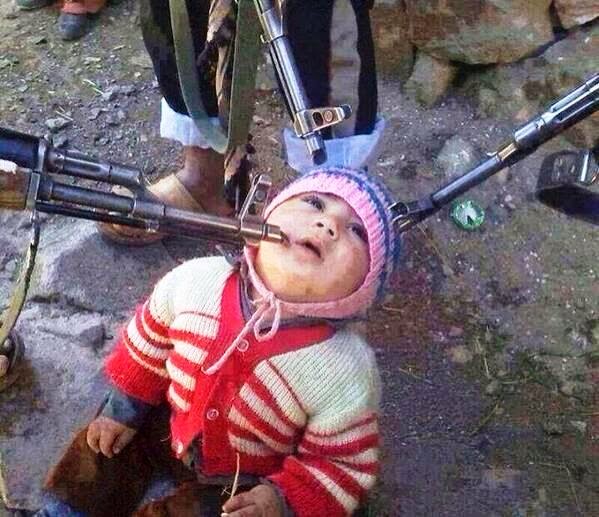 According to Sham Times, jihadi social media networks posted the above picture of a child sitting on the ground while surrounded by armed men pointing their rifles at him.  The caption appearing with the picture, purportedly posted by a supporter of the Free Syrian Army, is “Our youngest hostage from among the hostile sects of Kessab.”
Kessab is a predominantly Christian Armenian village in Syria near the Turkish border.  Earlier it was invaded by jihadis, who terrorized, pillaged churches, and prompted some 2000 residents to flee.  Initial reports had stated that about a dozen families remained as hostages.
Since the picture appeared on social media, many have expressed shock and outrage, condemning the Syrian “rebels,” while others cast doubt on the authenticity of the picture.
The fact remains that the “Free Syrian Army,” along with other “rebel” groups operating in Syria, are guilty of several crimes against humanity — including against women and children.
Posted by Unknown at 8:28 AM