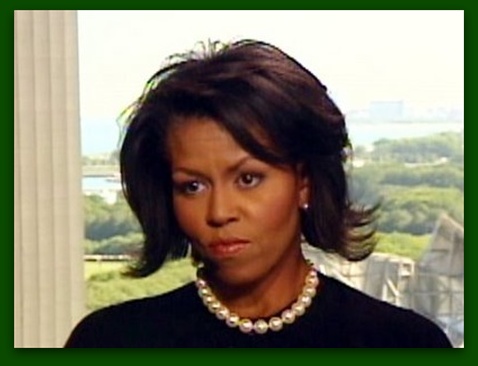 I did some background checking into Michelle Obama and her links with socialists, communists and other high ranking radicals that wish nothing more than to destroy the United States as it is, and create a brand new United States! This may sound absurd and demeaning, but it is true. Some of the words spoken by Michelle Obama and her husband Barack Obama have come directly from a radical book titled Rules for Radicals by Saul D. Alinsky.

I’ll expose Alinsky’s background in future articles, but before we go too far, let us just start with Michelle Obama’s college days, since to find her high school history seems to be quite difficult. Michelle Obama’s maiden name was Michelle LaVaughn Robinson, and she was born on January 17, 1964. She married Barack Hussein Obama in 1992.

According to FrontPageMagazine reporter Jacob Laksin,

“In a [February 2008] interview with Newsweek, [Michelle] Obama reveals that she got into Princeton … not on the strength of her grades, which she admits were unexceptional, but thanks to her brother Craig, a star athlete and gifted student who preceded her to the school. As a ‘legacy’ candidate and a beneficiary of affirmative action, Michelle Obama was granted an opportunity that others more accomplished were denied.” The First lady got her college education due to her brother and her ethnicity, not her excellence in academics.

READ MORE FROM THE BARRACUDA BRIGADE

*  This blog does not guarantee the accuracy of this information.  Purely posted for informational purposes.
Posted by Unknown at 7:03 AM