Alton Hayes was angry about Trayvon Martin (My FOX Chicago) 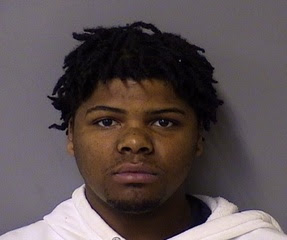 A Chicago man says he beat and robbed a white male because he was angry about Trayvon Martin (who was shot by a Hispanic man).
My FOX Chicago reported:


Alton L. Hayes III, a west suburban man charged with a hate crime, told police he was so upset about the Trayvon Martin case in Florida that he beat up a white man early Tuesday.

Hayes and a 15-year-old Chicago boy walked up behind the 19-year-old man victim and pinned his arms to his side, police said. Hayes, 18, then picked up a large tree branch, pointed it at the man and said, “Empty your pockets, white boy.”

The two allegedly rifled through the victim’s pockets, then threw him to the ground and punched him “numerous times” in the head and back before running away, police said. Hayes and the boy are black; the victim is white.

After being arrested, Hayes told police he was upset by the Trayvon Martin case and beat the man up because he was white, Cook County State’s Attorney’s office spokeswoman Tandra Simonton said, citing court records.
Posted by Unknown at 9:04 PM