According to stolen Stratfor emails published on Wikileaks, John McCain’s campaign in 2008 had evidence that the Obama Campaign was stuffing ballot boxes in Ohio and Pennsylvania and also had proof that the Obama team had “sleazy” Russian money in their coffers. 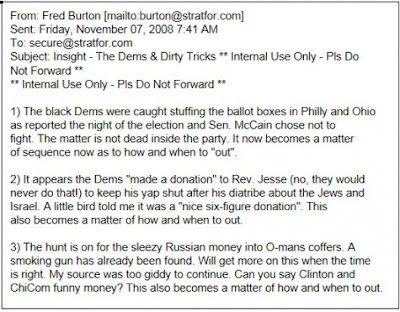 And look at this comment from Bitter Clinger via Gateway Pundit

He states "I was personally contacted by the Obama campaign on the Sunday prior to early voting in OH. They told me that I was needed to “help with the vote” in OH. A bus would be leaving the St Louis area and taking Obama supporters to OH. They told me I should be prepared to be gone for two nights. I explained that I was a registered republican and asked how they got my name. Answer: You’re on a list that I have and was told to contact everyone on it. we need you to help with the vote in OH. Question: Where did you get the list? Answer: ACORN. But, that’s illegal, I said! She laughed at me. I contacted the McCain campaign, the RNC, the local print, radio and TV media. No one would return my calls or respond to my concern. In early 2011, after the new Sec of State was in office in OH, I contacted that office and made him aware that bus loads of Obama supporters may be flooding the state again in 2012 based on my personal experience. They have been warned. I hope they are paying attention."