This is funny. Why have I not heard about this in the media?? 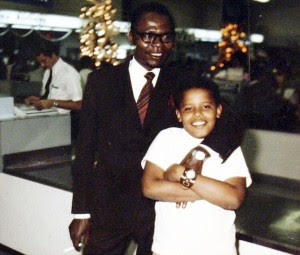 Funny that nobody in the American media is talking about how US and UK officials expressed concerns about some Kenyan students studying in the United States. One of those students was Barack H. Obama Sr.


A memo from a British diplomat in Washington to Whitehall — released today by the National Archives in West London — sets out their concerns about the young Kenyans.

Dated September 1, 1959, it says: ‘I have discussed with the State Department. They are as disturbed about these developments as we are. They point out that Kenya students have a bad reputation over here for falling into the wrong hands and for becoming both anti-American and anti-white.’

In one of the Foreign Office files, the future president’s father appears on a list of Kenyan students as ‘OBAMA, Barack H’ — they shared the same name.

At the age of 23, he enrolled at the University of Hawaii in Honolulu to study economics with classmates including Ann Dunham, a 17-year-old white American from Kansas. The couple had a short marriage that led to the birth in 1961 of the future president, Barack Obama II. …

‘The motives behind this enterprise, therefore, seem more political than educational,’ warned a letter from the British Embassy in Washington.

It added: ‘The arrival here of these students, many of them of indifferent academic calibre and ill-prepared for the venture, is likely to give rise to difficult problems.’ (Read More)

Boy, did it ever give rise to difficult problems.