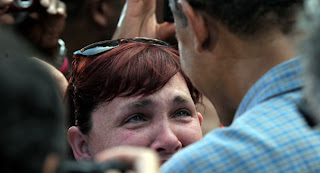 After Obama's speech in Sandusky, he encountered a sobbing Stephanie Miller, who later told reporters about her encounter with Obama.

"I thanked him for the getting the Affordable Health Act passed," Miller said, referring to the health care overhaul the Supreme Court upheld last week.

Miller said her sister passed away from colon cancer four years ago — partly because she could not purchase .

"Even after she was diagnosed with cancer, she was told her income was too high for Medicaid," Miller said.