Why Gun Control Will Never Find Favor in the United States 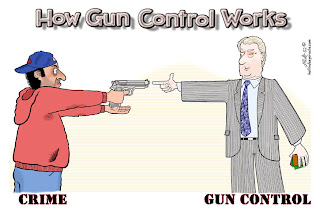 Posted on July 4, 2012 by Robert Farago Via Truth About Guns
When TTAG hit the ‘net in 2010, the pendulum was swinging towards gun rights. The country was finally emerging from the dark days after the Civil War, before the Supreme Court’s Heller and McDonald decisions. A time when draconian gun control laws left African Americans defenseless against racist killers. When criminals could and burglarize law-abiding citizens safe in the knowledge that the government had disarmed their victims. The battle to defend our gun rights is not over. It will never end. But on this July 4th, I want to give readers a reason to be cheerful . . .


I could cite stats proving that American gun rights are ascendant. This site has more than 5,000 posts making that point. As you know, those who oppose the spirit and letter of the Second Amendment have no more interest in facts than fans of Candice Swanepoel have in seeing the South African model become a latter day Anita Bryant.

Gun control advocates will never rest until the collectivist spirit is expressed—or re-expressed—by the curtailment of our individual right to keep and bear arms.
You don’t have to live in Hawaii, New Jersey, Illinois, New York, California or any of the other places in America where gun rights are abridged to know the truth of that statement. But here’s another truth that I hold to be self-evident: gun rights have more emotional appeal than gun control. And therein lies our real dare I say eternal strength.

Let’s call the first motivator ambition. It has both an upside (human industry, cooperation and innovation) and a downside (unbridled greed and criminality).

Whatever else you can say about criminals, they have ambition. They use guns as a primary tool to achieve their desires.

But most Americans are not criminals. They don’t see guns as a way to secure money and power. They are a law-abiding people with a deep and lasting respect for the personal and property rights of their fellow citizens.

Gun control advocates try to tie firearms to law-abiding Americans’ “ambition” to live, work and raise their children in a peaceful, harmonious environment.

They would have law-abiding Americans believe that limiting citizens’ access to firearms is key to their safety and security. Restricting the right to keep and bear arms to the state (i.e. the police) will severely curtail if not completely eliminate gun violence.

For gun control advocates, the “fact” that this strategy hasn’t worked is besides the point. If they acknowledge this failure (which they generally don’t), they contend that gun control hasn’t been effective because the state hasn’t been allowed to pursue “common sense” disarmament with sufficient zeal.
According to The Brady to Prevent Gun Violence and their ilk, gun clingers hamper their efforts to create the non-violent society citizens seek. We are but a few laws away from an end to gun violence.
Thankfully, gun control advocates’ strategy is inherently flawed.

Most people have very little ambition. They’re not interested in pursuing utopian dreams. They don’t want to “win” anything. They want to not lose.

What’s the best way to defend your personal resources when facing the threat of criminal confiscation? A gun.

Gun rights advocates talk about the Second Amendment as a bulwark against losing freedoms guaranteed by the U.S. Constitution—protecting Americans against a tyrannical government. True dat.
But the ascendency of gun rights proves that Americans want guns to protect themselves against face-to-face criminals, not the feds. They want to defend themselves and their families first, the second. If at all.

Gun control advocates can only gain traction if they convince the voting majority that they’re safer without guns than with. That’s a patently ridiculous idea—unless voters come to political maturity without any personal experience of firearms.

Gun rights groups like the NRA, TTAG and the gun bloggers who’ve gone before us have done much to combat ignorance and welcome newbies to the firearms fold. There is much to be done. But we are doing it. And we will win.

We the People are, after all, people. As long as the gun rights community appeals to basic human nature, and we do, we will protect and reinvigorate the power that is contained within Second Amendment. Thank God for that.